“The whole population of Niger is at shock after Tazalit attack,” said Malian refugee in Niger. Malians fled Mali to find safety in Niger, but it’s challenging for a country with no resources and capabilities, and facing violence spillover from neighboring countries. After Bosso attack not too long ago, Niger yet again is at shock and at a moment of sadness. While Niger managed to contain at some level domestic violence related to violent extremist organizations (VEOs), could not keep VEOs from penetrating its territories. Both incidents, Bosso and Tazalit, were a result of an insurgency occurring in a neighboring country. Images below show another sad moment of innocent Nigerien security forces buried as a result of a conflict in a neighboring country.

Niger witnessed yet again a deadly attack by suspected jihadists on 06 October 2016, and this time in Tahoua Region. The attack was reportedly targeted Nigerien forces post at Tazalit refugee camp. Nigerien Prime Minister confirmed the incident and that at least 22 Nigerien security members were allegedly brutally executed by bullets to the head, including 14 National Guards, 5 Gendarmes, and 3 Soldiers. Five other officers were injured while only three survived the attack. Aggressors appeared well informed and knew where security post is located. The attackers reported to be around 40, and conflicting reports speaking Arabic and Tamasheq [Tuareg language]. During the attack weapons were seized, as well as ammunition, three vehicles, and one ambulance.

As of 10 October no group claimed responsibility and difficult to identify who is behind the attack. The area is on the borders with Ménaka Region, northern Mali where different groups have operated and occupied since 2012. The Movement for Unity and Jihad in West Africa (MUJWA) might appear the main suspect but since 2012 the group have been weakened and witnessed major division among its leadership. While seems unlikely to have the capacity to carry such a deadly attack in Niger, MUJWA have demonstrated during previous attacks [see timeline below] its ability to penetrate Nigerien territory and appear to be very familiar with the area.

History of attacks, familiarity with the area, and local recruitment carried in the area suggest MUJWA is the strongest suspect behind this attack. Remaining MUJWA members have been quiet for over a year but this should not lead to the conclusion that is not operational. For instance, several violent attacks against Malian, Foreign, and armed groups forces took place in Mali near Nigerien borders and were never claimed by any VEO. Jihadist groups in the Sahel demonstrated are patient and willing to keep low profile then carry spectacular attacks when least expected. Take for instance Ansar al-Din in Mali; the group barely made headlines after the French intervention in January 2013. As of today, Ansar al-Din is the deadliest jihadist group in Mali and has expanded its area of operations. Another example al-Qaeda in the Islamic Maghreb (AQIM), almost disappeared then resurfaced claiming attacks beyond northern Mali in Bamako, and beyond Mali for the first time in Ouagadougou, Burkina Faso, and Grand Bassam, Cote d’Ivoire. Thus it will be immature to say MUJWA is out of the equation.

Al-Qaeda in the Islamic Maghreb (AQIM) and Adnan Abu Walid al-Sahroui men are the other two suspects. Al-Sahroui men, MUJWA splinter, pledged allegiance to so-called Islamic State (IS) in May 2015, carried and claimed its first attack last month in Burkina Faso near the borders with Mali and Niger. Al-Sahraoui was quick at claiming the Burkina Faso attack, so why not this one, especially with the number of casualties among Nigerien forces and the incident got more coverage? The same could be said about AQIM “ghost” brigade al-Nasser, it has been quiet and unclear why would not claim such spectacular attacks.

Despite who is behind Tazalit incident, the attack highlights the concern Niger is facing in regions other than Diffa and southeast area in general. Niger was repeatedly praised for being able to contain domestic conflicts that were aggravated post Libya revolution in 2011. However the country did not escape sporadic attacks in different parts of the country. As the timeline of attacks below shows, Niger experienced attacks in almost all regions that resulted important number of casualties.

Niger Regions Tahoua and Tillabery have been facing major security concerns despite that VEOs never held strong bases at any of these areas. For instance MUJWA was content to show no intention at establishing bases in Niger but willing to demonstrate its operational abilities penetrating and carrying attacks on Nigerien soil. Similar could be said about AQIM that have been using Nigerien territory to conduct operations as far as the capital Niamey.

Niger is surrounded by countries facing political and religious insurgencies and lacks the resources and capabilities to protect its territory. While it remains unclear which group is behind Tazalit attack, Niger is most likely to continue to be a fallback for VEOs facing pressure in neighboring countries to carry spectacular attacks. These attacks have different goals: to seize weapons and to remain popular to local population for recruitment purposes.

Timeline of Attacks on Niger: Tillabery, Tahoua, and Agadez Regions

On 11 September 2016 unknown gunmen carried an attack on Nigerien security post at Tabarey Barey refugee camp just outside Ayorou. As a result two civilians and one Nigerien soldier injured. No group claimed responsibility.

On 17 March 2016 unidentified gunmen attacked a Nigerien gendarmerie post. Three gendarmes were killed, and no group claimed responsibility and it’s an area where different groups could be responsible, including former MUJAO men under Adnane Abu Walid al-Sahraoui, al-Murabitoun of AQIM under Belmokhtar, or members of Ansar al-Din South brigade. This one attack demonstrates how little is known about the area and group’s operating there.

On 28 April 2016 unknown militants killed one policeman was and injured two in Tahoua Region in an unknown location few miles from the borders with Mali.

On 19 November 2014 suspected members of MUJWA entered Niger from Mali and carried an attack Bani Bangou town, Tillabery Region. The attack targeted Gendarmerie post at the exit of the town. One Nigerien security officer killed and two injured.

On 23 May 2013 Belmokhtar men carried simultaneous attacks in Agadez and Arlit, Agadez Region. Attacks targeted Uranium facility in Arlit and military base in Agadez. As a result at least 24 Nigerien security members killed.

This report, however, includes unseen images and screenshots of Macina brigade high quality video after Nampala attack. For the first time Sahel MeMo is providing pictures of Macina fighters and important amount of weapons seized from Malian Army in Nampala July 19th.

September security incidents could be found by clicking on the link below. Also please note the full report is available on PDF: http://www.sahelmemo.com/2016/10/04/mali-aqim-ansar-al-din-and-other-related-security-incidents-for-september-2016/ 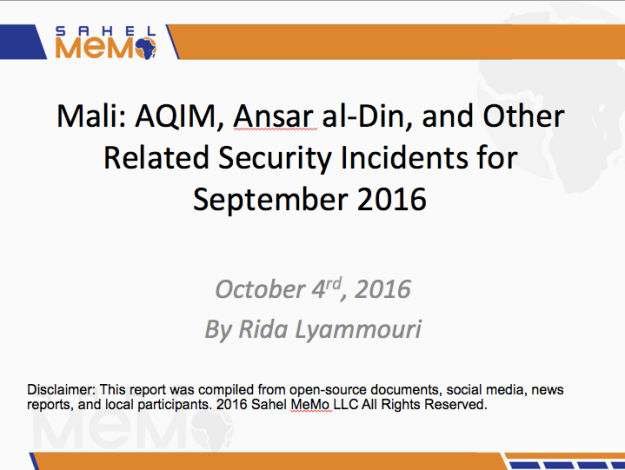